The Peabody Conservatory’s four-year Bachelor of Music degree in Music for New Media is designed to prepare you for a future in this field, whether your particular interest is in film scoring and movie music, composing soundtracks for video games, writing music for TV, or composing for virtual and augmented reality experiences. 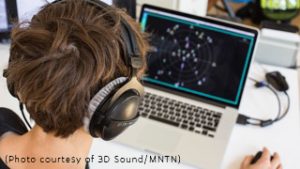 Once esoteric, this specialty of composing for ‘XR’ is now rapidly becoming mainstream as devices like Oculus Rift and Quest, HTC Vive, Sony PlaystationVR, and Microsoft HoloLens arrive in the consumer marketplace. New career paths are opening up for serious musicians well-versed in sound design and composition for VR/AR, TV, games, and film. Music for New Media at Peabody will help you develop the skills and creativity required and support your pursuit of a wide range of internships and placements in the music-making workforce.

In this cutting-edge new program, you will study the fundamentals of music’s function within conventional visual media such as film and television, analyzing how and why music is used to enhance the dramatic and emotional effect. Transitioning from linear to non-linear media such as games, you and your fellow students will learn to work in industry-standard programming environments such as the Unity™ engine and Wwise audio middleware. In addition to standard game consoles and head-mounted displays, we will investigate output devices ranging from holophonic headphones to multi-speaker arrays. New Media majors will take core courses in composition, theory, ear training, sight-reading and arrangement, with a special emphasis on film scoring and composing for video games, VR, and other media platforms. Compositions scored for traditional instruments will be realized through software emulation, and you will have ample opportunities to record and mix music in the Recording Arts department’s state-of-the-art studios.

In the third and fourth years of the program, you will work one-on-one with a mentor to advance your technique and refine your understanding and execution of needed skills for a career in media composition. Capstone projects undertaken in the final year of the degree will take advantage of the wide spectrum of unique collaborations possible at Johns Hopkins: you might choose to work with the JH medical campus to utilize EEG brainwave data to manipulate music, or to develop therapeutic applications for stroke victims; to program audio software from the ground up at the Whiting School of Engineering; or to collaborate with writers and directors at the JHU/MICA Film Centre to create real-time soundtracks for immersive 360º video storytelling.

If you wish to continue your performance studies, qualified students may audition to double-major (check the audition requirements for your instrument), or elect to take minor lessons. And as with other Peabody majors, it is possible to combine the Bachelor of Music with a bachelor’s degree from the Krieger School of Arts and Sciences or the Whiting School of Engineering by way of our double-degree program.

New Media Seminars invite music industry professionals to present their work and lessons from their experience to students in the department. Each semester will include presentations on topics such as music technology and music production, composition software and hardware tools and creative techniques, as well as real world insight into the business of composing for new media.

Students in the BM Music for New Media program may apply for the five-year BMRA/MA program with an adjusted program of study. Interested students should consult with Peabody Advising and department faculty.

Applications and materials must be submitted to Academic Affairs by May 1 during the student’s third year of study. Admission to the BMRA/MA does not extend financial aid arrangements beyond a fifth year of study, nor does it guarantee continued major lessons in performance or composition.

The list of breakthrough innovations in Thomas Dolby’s 35-year career is continuous. As an early MTV icon he blazed a trail for electronic music with his imaginative videos. The same year as his own record reached the top of the pop/dance charts, he co-wrote and produced the first ever platinum-selling rap 12” single “Magic’s Wand” by Whodini. He has performed with David Bowie, Stevie Wonder, Herbie Hancock, George Clinton and Roger Waters.

In 1992 Thomas co-designed the first ever music-based VR experience ‘The Virtual String Quartet’ for the Guggenheim Museum in New York. He also composed soundtracks for games on CD-ROM, PC, Sega, Xbox and Playstation, as well as location-based entertainment installations. Holding multiple patents, he is the co-author of the audio layer of Java™, and the industry-standard Mobile MIDI polyphonic ringtone file format; and he co-designed the Beatnik ringtone syntheziser that is embedded in hundreds of millions of mobile phones.

Chris Kennedy is the Senior Composer at Noise Distillery/Clean Cuts Music in Baltimore. An Emmy-nominated composer for film and TV, he has scored music for NBC, PBS, Smithsonian, Discovery, and National Geographic.

Joe Powers is a sound designer and audio mixer for Discovery Inc in the Washington D.C. area. For over 20 years, he has mixed long and short form projects for National Geographic, PBS and PBS Kids, Smithsonian, TNT, NBC, Dreamworks, Icebreaker Films, Technicolor Sound, The Weather Channel, and many independent filmmakers.

Computer Music is offered as a four-year, undergraduate degree program that combines music and technology with a strong focus on composing both traditional and experimental music. Students work with the latest digital synthesis hardware and software and learn through private and classroom instruction to develop composition techniques which take advantage of the unique capabilities of electronic and digital music technology. Studies include computer composition, computer performance and improvisation, and multimedia studies (including audio, video, dance, and graphics with music). Students have the opportunity to earn a Master of Music degree in Computer Music with one additional year of study by applying to the five-year BM/MM program.