What are some of your main goals as an instructor related to student learning?

What I want to convey to my students is how a consistent logic unifies music from the smallest to largest level. The pitches in a melody connect to a harmonic progression which connects to a key which connects to a form. I hope they are able to think simultaneously about the beauty of the primary melody, the counterpoint in the accompaniment, and the relevance of this moment to the rest of the piece.

How did your teaching progress after you started teaching remotely?

I was already familiar with Zoom, so, from my perspective, the actual class-time transition was not too bad. I also already had copies of all homework assignments online, since even in person, students cannot make every class. While I had to make concessions to the students’ availabilities and resources, I was able, mostly, to keep close to my original schedule for lectures and assignments.

What is a challenge you’ve encountered while teaching, and how did you address it?

The challenge in switching to Zoom was the lack of interaction during the classes. In my classes, I usually teach by asking questions and expounding upon the responses. I like to ensure that the students are engaged by both having general questions and asking specific people. Online, the students had their mics and cameras turned off, so I sometimes felt like I was talking into a void. The way I dealt with this was that, early on, I said that the chat function was for questions, puns, and witticisms. I counted on students who made jokes when we were in person continuing to do so online, which they did. I would see nothing for 15 minutes, and then suddenly a funny comment about something I said would appear on the screen, followed by several thumbs up icons. I was happy to know that they were there and paying attention. If there was silence for too long, I would tell the students to turn on their mics, and we would have a conversation. 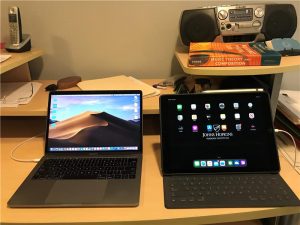 What does your teaching setup at home look like?

In January, we had our final inspection for some basement renovations. I now have office space with a door, which is much better than the kitchen table. Technology-wise, I have a MacBook Pro and an iPad. The laptop is mine, the iPad is a loaner from the school.

What advice do you have for other faculty?

This is really practical and specific, but having an iPad with a stylus saved my teaching. I signed it out from IT earlier in the year just to try it out, and I had not done much with it. When we switched to online, I quickly became dependent on it. Initially I created annotated scores, and it destroyed any discussion during class. What I had pre-written on the score was set in stone. With a stylus, I was able to write student comments and observations in real time. This arrangement allowed a much more collaborative learning experience.

How do you want your students to remember this time after they have left Peabody?

My hope is that they do not feel like their education suffered. Yes, we had to make accommodations for the situation. Despite this, I feel that I was able to keep the information flowing, and I was pleased with the level of depth class discussions and comments reached. I hope the students walked away thinking that, while it was a challenge, they still learned a lot.