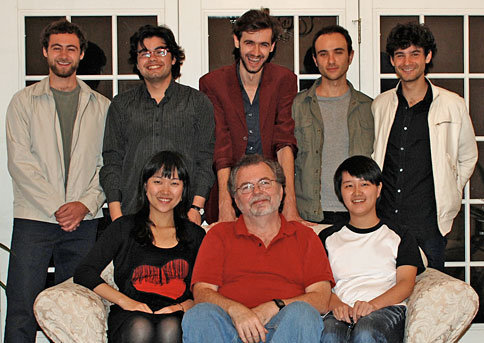 Gonzalo Arias Contreras was born in 1989 in Los Andes, Chile. Arias Contreras started working towards his bachelor of arts with a concentration in classical guitar at the age of 14 at the University of Chile in Santiago, under the care of the master Romilio Orellana.

Gonzalo Arias Contreras has played with the Pepperdine Symphonic Orchestra in the USA, and he was invited to play in the Ventura Music festival in California, and the Allberville Conservatory in France.

He has participated in master classes with renowned guitarists Elliot Fisk, Zoran Dukic, Carlo Marchione and Hubert Kappel, and he participated in the Seminar 15 Internationales Pfingstseminar in Koblenz, Germany, and the Twents Festival in Enschede, Netherlands.

In 2007 and 2008, Arias Contreras won a scholarship to study at Pepperdine University in California under Christopher Parkening in the Parkening Artist Program.

Currently he is continuing his education at the Peabody Conservatory of The Johns Hopkins University in Baltimore, MD, under the care of Manuel Barrueco.

Çeku has won top prizes in numerous competitions. Among them first prize in the All-Croatian Competition in Dubrovnik in 2003 as well as first prize in the international guitar competition Anna Amalia in Weimar, Germany. The following year he won the Emilio Pujol guitar competition in Sassari, Italy, as well as the Andrés Segovia in Velbert, Germany. Also in 2004, he represented Croatia in the European Music Prize for Youth in Dubrovnik and won first prize, as well as the Croatian Composers’ Union prize for the performance of a work by a Croatian composer. He was the only guitarist in the international young music artists’ competition Ferdo Livadic in Samobor, Croatia, and won first prize by unanimous decision of the jury. He also won the annual prize of The Croatian Music Youth in the year 2005.

Petrit Çeku was awarded the Silver Medal in The Parkening Competition in Malibu, California, and second prize in the Printemps de la guitare in Charleroi, Belgium in 2006. By winning the Pittaluga Competition in Alessandria, Italy (2007), Petrit Çeku established himself as one of the leading guitarists of the young generation. In 2008, Petrit Çeku was awarded the annual prize of The Zagreb Philharmonic Orchestra as The Best Young Musician of the Year 2008, and his first solo CD was released on the Naxos label.

He currently studies with Manuel Barrueco at the Peabody Conservatory in Baltimore, USA.

As a guitarist, Jeremy Lyons has performed in several master classes for artists including Marcin Dylla, Franco Platino, and Jerome Ducharme. Most recently he won first prize in the 2009 Philadelphia Classical Guitar Society Student Competition in the collegiate division.

Jeremy Lyons is currently completing his master of music degree in guitar performance and pedagogy at the Peabody Conservatory of The Johns Hopkins University, where he studies with Manuel Barrueco.

Marco Antonio San Nicolas was born in Murcia, Spain, where he completed his musical studies at the Rafael Orozco Superior Conservatory of Music with honors, in addition to his private lessons with the Spanish master, Jose Tomas. He has performed in master classes with such masters as Manuel Barrueco, David Russell, and Leo Brouwer.

San Nicolas has performed in concert throughout Spain and Europe and his recitals have been broadcast on Spanish radio and television. At the Cordoba International Guitar Festival, he shared top bill with artists such as B. B. King, Pat Metheny, George Benson, and Manuel Barrueco. The Cordoba Diary described Mr. San Nicolas as a “…solid concert guitarist, his sound has body and richness of color, and as a guitar player, he has all the technical means to completely develop all of his musical potential, which is substantial.”

San Nicolas has collaborated on a CD with the winners from the other divisions of the Ruperto Chapi National Competition, where he recorded music of the Spanish composer Federico Moreno Torroba.

He was a professor of guitar at the Santa Cecilia Conservatory and the Antonio de Nebrija Institute of Music for several years.

In 2009 Marco Antonio San Nicolas was awarded the “Solomon H. Snyder Annual Scholarship in Guitar,” the “Augustine Foundation Annual Scholarship,” and a scholarship by the Spanish government to study at the Peabody Conservatory of The Johns Hopkins University, where he is currently enrolled in the graduate performance diploma program with Maestro Manuel Barrueco.

Embarking on an exciting guitar career as one of the most outstanding guitarists of her generation, Meng Su began her training in classical guitar with renowned Professor Chen Zhi at the age of nine, where she quickly began attracting attention as a remarkable young talent. Before graduating from the High School of the Central Conservatory of Music of China in 2006, Su had already won many awards, including the 5th Vienna Youth Guitar Competition, the 48th Tokyo International Guitar Competition, the Christopher Parkening Young Guitarist Competition, and the 2nd Iserlohn International Guitar Competition in Germany.

In her short time as a performing artist, she has performed solo, duo, and quartet concerts across the United States, United Kingdom, Canada, Austria, Germany, Korea, Japan, and China, in which she has impressed audiences with an ability and artistry that exceeds her years.

Su’s discography includes a live CD and DVD release of a 2005 guitar concert in Korea as well as a release of Four Angels in Korea.

Meng Su formed a duo with Yameng Wang, and their first duo recording as the Beijing Guitar Duo, called Maracaípe, is schedule to release in the fall of 2009.

As a recipient of the “Solomon H. Snyder Award,” Su will do her New York debut at Carnegie Hall’s Weill Recital Hall in April of 2010.

Su, a recipient of the “Fanny B. Thalheimer Memorial Scholarships,” recently obtained her performer’s certificate from Peabody Conservatory in Baltimore, USA, and is currently continuing her studies with guitar virtuoso Manuel Barrueco, in the graduate performance diploma program.

Wang has given acclaimed recitals across the US, France, Italy, Germany, Britain, Austria, Spain, Belgium, Switzerland, Poland, Australia, Japan, and Malaysia both as a soloist and in chamber music setting.

Her first album, Caprice was recorded when she was 16 years old. A Very Special Album was released in 1999, and in 2003 she contributed GHA’s album, The Best of Classical Guitar. In 2005 Classic Guitar – Aquarelle, Un Sueño en la Floresta was released.

Her latest recording Maracaîpe is scheduled to be released in the fall of 2009. On it she performs Brazilian music with her duo partner Meng Su. This is the first recording they release as the Beijing Guitar Duo.

After graduating from the Central Conservatory of Music of China in 2006 with a bachelor’s degree, Wang, a recipient of the “Sylvia Friedberg Nachlas Endowed Scholarship,” enrolled in the Peabody Conservatory in Baltimore with a full scholarship. There, she finished her master of music degree in 2008 and is currently finishing her graduate performance diploma with guitar great Manuel Barrueco.

As a recipient of the “Solomon H. Snyder Award,” Yameng Wang will do her New York debut at Carnegie Hall’s Weill Recital Hall in April of 2010, with her duo partner Meng Su.

Originally a violinist, Jonathan Zwi began the classical guitar at the age of 18 when he found a passion for the instrument during his undergraduate studies at Indiana University-Bloomington, where he completed his Bachelor of Music degree under the direction of José Antonio López, Julio Ribeiro and Ernesto Bitetti. In addition to his degree in Music, Jonathan also received degrees in Philosophy and Cognitive Science. He was the recipient of several research fellowships at both Indiana and Yale University, including a grant from the NIH that led to a major publication, and has presented his work at numerous research conferences across the United Sates.

In June of 2007, Zwi moved to Brazil to focus on the guitar and re-identify with his heritage and in July he won first place in the 1st Eustáquio Grilo International Guitar Competition. As part of his award he toured Brazil, performing concerts in the cities of São Paulo, Rio de Janeiro and Brasilia.

During his time in Brazil, Zwi was a student at the School of Music at the Federal University of Bahia under the guidance of Mario Ulloa. He was also enrolled in the University’s School of Fine Arts, specializing in printmaking, silkscreen and photography, and has shown his work in various exhibits and galleries throughout Salvador, Bahia. He has continued to exhibit his work upon returning to the United States.

Jonathan Zwi completed his Master’s degree at the Peabody Conservatory at Johns Hopkins University under the guidance of Ray Chester and is currently pursuing a Graduate Performance Diploma under Manuel Barrueco.