Home
Giving
Ways to Give
Gift of Music
Tia Price 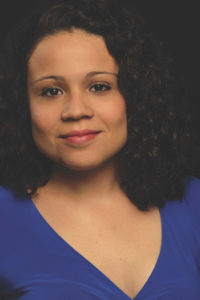 Tia Price is an ardent performer of opera, oratorio, and art song. She can be heard singing works such as Verdi as well as works by contemporary composers. In recent seasons she appeared as the mezzo soprano soloist in The Defiant Requiem presented at the Peabody Institute under the direction of Maestro Murry Sidlin. She also performed as Rose in Delibes’ Lakmé, and as Ferdinand in Douglas Buchanon’s Ariel’s Tempest– an opera created specifically for the Peabody Opera Outreach program.

During the 2013-2014 season, Price will perform the role of Mère Marie in Poulenc’s Dialogues des Carmelites at the Lyric Opera of Baltimore. She will also be the alto soloist in Handel’s Messiah to be performed with the Amadeus orchestra in Alexandria,Virginia.

Ms. Price is very passionate about celebrating music in the community, and can be heard performing various concerts in the Baltimore city area. In 2014, she was featured as a soloist at the Baltimore Hebrew Congregation New Year’s concert under the direction of James Harp, and will also be featured as soloist at various locations with students from the Peabody Preparatory’s Tuned-In program. She also sang Mahler’s Um Mitternacht with wind band as well as the premiere of the song cycle This Is My Voice composed by Natalie Draper.

Ms. Price obtained a Bachelor of Arts in Vocal Performance from Alderson Broaddus College in Philippi West Virginia in 2012. She received her master’s degree in voice from the Peabody Institute of the Johns Hopkins University in 2014 as a student of the eminent mezzo soprano Denyce Graves. At Peabody, she was the recipient of the Arno and Ruth Drucker Scholarship. She has received many awards including the Jack and Virginia Clinard Vocal Award, winner of the Johns Hopkins Woman’s Club Scholarship, and she was the 2013 recipient of the prestigious Peabody Presser Music Award. Miss Price resides in Baltimore, MD.