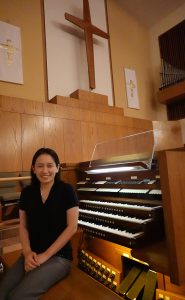 A native of Kobe, Japan, Midori Ataka is a Master’s degree candidate in the studio of John Walker at Peabody Conservatory of Johns Hopkins University. Having started private piano lessons at age six, she  later earned  a Bachelor of Arts in Music at Northwestern College in Iowa. She studied piano with Mrs. Lisa Duitman and Mrs. MaryLou Wielenga and organ with Dr. Rodney Jiskoot. While at Northwestern, she received the Shultz Music Scholarship and Music Activity Award; she was also named to Who’s Who among Students in American Universities and Colleges. Before moving to Baltimore in 2019, Midori maintained a private piano studio in Torrance, California. In addition to teaching, she was the Organist/Pianist at First United Methodist Church of Torrance and a piano accompanist at West Torrance High School and Jefferson Middle School. Midori attended El Camino College in Torrance to study organ with Dr. James Hurd in the Applied Music Program. Currently she is organist at Mt. Calvary Catholic Church in Baltimore. She is a member of the American Guild of Organists Los Angeles and Baltimore Chapters. She is the recipient of the Artistic Excellence Award at Peabody. 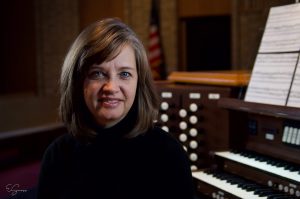 Wendy Johnston is a student of John Walker and a Master of Music candidate at the Peabody Conservatory of the Johns Hopkins University in Baltimore, Maryland. She holds a Bachelor of Music in Organ Performance from Shenandoah Conservatory in Winchester, Virginia and a Bachelor of General Studies from Brigham Young University in Provo, Utah where she has also completed work in piano performance. Wendy combines her love of the organ, piano and choral music in her work as rehearsal pianist and performance organist for the Masterworks Chorale of Carroll County, MD.  She has served as organist and choir director at the Church of Jesus Christ of Latter-day Saints in Mt. Airy, MD since 2003 and is on the faculty of the BYU Traveling Organ Workshop which provides education and training to aspiring organists. Hailed by The Baltimore Sun as a “rising organ star,” Jordan Prescott has established himself as one of the leading organists, church musicians, and directors of his generation. A native of Greenville, North Carolina, Jordan holds the Bachelor of Music in Organ and Sacred Music from East Carolina University. While at East Carolina, he spent two years as Organ Scholar of Duke University Chapel in Durham. Following this appointment, Jordan held a similar position at Emmanuel Episcopal Church in Baltimore. In 2019, Jordan was graduated cum laude with the Master of Music in Organ Performance from the Peabody Conservatory of Johns Hopkins University. He is now pursuing the Doctor of Musical Arts at Peabody, where he holds the coveted Dean’s Fellowship. Jordan’s teachers have included John Walker, Andrew Scanlon, and Christopher Jacobson. Additionally, he has studied in Paris with Marie Louise Langlais. He is currently Director of Music and Organist/Choirmaster at St. Peter’s Episcopal Church, Ellicott City and Assistant Director of Music at St. John’s Episcopal Church, Ellicott City.

As a solo recitalist, Prescott performs extensively across the United States with recent and upcoming engagements at Trinity Church and King’s Chapel (Boston), West Point Military Academy Cadet Chapel, Bruton Parish (Williamsburg), National City Christian Church and Washington National Cathedral (Washington, D.C.), Grace Cathedral (San Francisco), Princeton University Chapel, Trinity Wall Street, and the Cathedral of St. John the Divine (New York City). As an ensemble musician, Jordan has appeared under the batons of Marin Alsop, Nicolas McGegan, Joseph Young, and Edward Polochick. In 2018, Jordan earned first prize in the 16th International Organ Competition at West Chester University. Jordan currently serves on the National Board of the American Guild of Organists: Young Organists and was named one of Diapason magazine’s ’20 Under 30’ in 2019. Jordan’s research has been published in The American Organist magazine and he will present three workshops at the 2020 AGO National Convention in Atlanta.

Jordan sang with the ECU Chamber Singers for three years including their acclaimed performances at the European Grand Prix for Choral Singing in Spain, Slovenia, and Bulgaria. Prescott spent seven seasons as Associate Musical Director of The Lost Colony, America’s longest running outdoor drama and recipient of the Tony Honor for Excellence in Theatre. Under his direction, The Lost Colony Choir rose to critical acclaim for their interpretation of the work of Stephen Sondheim. In 2018, they were featured as part of the ‘Sing Across America’ campaign celebrating the centennial of the National Parks Service. More information including a complete concert schedule and recordings is available online at www.jordanprescott.com. Mi Zhou is pursuing the Master of Music degree in Organ Performance at Peabody Conservatory as a student of John Walker. Previously she earned the Bachelor of Arts degree at Shanghai Conservatory of Music, where she studied both the electronic organ and the pipe organ respectively with Professor Lei Zhu and Meng Zeng. In 2014 she participated in the Haarlem International Organ Festival. She has performed in master classes for renowned organists such as Michael Radulescu, Masaaki Suzuki, and Katelyn Emerson. Also in 2014 Mi Zhou was awarded the third prize in the classic division at the Ringway International E-Organ Competition.