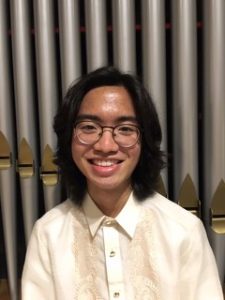 Christian Cang Cuesta is pursuing a Bachelor’s Degree in Organ Performance in the studio of Daniel Aune. Before playing the organ, though, he started with the violin and piano, actively participating in the Metropolitan Youth Orchestra of New York, All-County, the Long Island String Festival, and various school ensembles. Some of his favorite performances at high school include but are not limited to conducting heart-wrenching Beethoven with his school’s chamber orchestra, rocking out to Queen’s “Bohemian Rhapsody” on the piano, grooving on bass with the jazz ensemble, and (in his chemistry class) singing “The Periodic Table Song” by Mitchell Moffit. Upon discovering his passion for the organ, Christian has worked as a church musician and as a vampire in a Halloween event at school (featuring his transcription of Michael Jackson’s “Thriller.”) Even though he has only been playing for a total of about twenty-six months by the time he entered Peabody, he is looking forward to enhancing his abilities on, as Mozart once said, the “king of all instruments.” 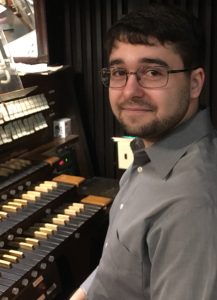 Jacob Kruzansky (b. 2000) is the sole student and declared protégé of internationally renowned concert-organist and scholar Anthony Newman. He first started playing the organ in January 2019, at age eighteen, and has quickly emerged as a rising star in the field: less than a month after being accepted to the Peabody Institute at Johns Hopkins in late May 2019, he appeared as the organ soloist in the world-premiere performance of Kathryn Salfelder’s Requiem at the Chelsea Music Festival in New York City, alongside Ken-David Masur and the GHOSTLIGHT Chorus. In the summer of 2019, Kruzansky was the first-ever organ major at the Eastern Music Festival in Greensboro, NC, where he studied with André Lash. He is an active recitalist, having made appearances in the United States and Europe, and performs frequently on the concert series at St. Peter’s Episcopal Church in Albany, NY. Before coming to Baltimore, he often accompanied Sunday services at All Saints’ Episcopal Church in Harrison, NY. Currently, Kruzansky is pursuing a Bachelor of Music in Organ Performance at the Peabody Institute, where he is a student of Daniel Aune.