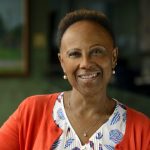 Toni Blackwell, Senior Associate Dean of Students and Interim Director of Student Affairs at Peabody Institute. Toni joined the Hopkins community in June of 2016. Toni has more than 30 years of experience working in Higher Education with a strong background in all aspects of Student Affairs. She is responsible for the planning, implementation, and oversight of the Student Health and Wellness initiatives for all undergraduate/graduate students on the Homewood Campus.

In addition to supervising the Director of the Student Health Center, the Director of Counseling and Psychological Services, and the Student Outreach and Support team, Toni is responsible for the day to day operations in the Dean of Students office.

Prior to joining Hopkins, Toni was the Associate Dean of Students at Berklee College of Music in Boston. Her portfolio includes serving as the College’s Title IX Coordinator as well as supervising academic advising, disability services, international student services, counseling services, and health services.

Throughout her career in Student Affairs, Toni has worked in small, private, and midsize institutions where she has also initiated strategic planning for Diversity and Inclusion efforts. She has a passion for working with and retaining historically underrepresented students on college campuses.

Toni received her B.A. from Russell Sage College in Creative Arts Therapy and her M.A. in Counseling/Student Personnel Services. Dan (He/Him/His) joined Peabody in 2016 as the Associate Director of Housing, Residence Life, and Summer Conferences. Dan’s work centers on developing a residential environment that supports students as they transition in to both the Peabody & Baltimore communities. Dan supervises the Resident Assistant staff, as well as the Graduate Head Resident. These positions deliver a campaign of both passive and active programs meant to provide students the tools needed to adjust to the freedoms and responsibilities that come with their new role as Peabody students. Dan also works closely with the campus judicial and emergency response functions and serves as the on-call administrator for the campus.

Dan holds a M.A. in Student Affairs in Higher Education from Indiana University of Pennsylvania, a B.A. in Music Theory & Composition from McDaniel College, and an A.A. in Music from Howard Community College.

When he is not at Peabody, Dan can be found engaging with the Baltimore theater scene, poorly recreating crafts found on Pinterest, or contemplating life’s deepest questions such as “is a hotdog a sandwich?” 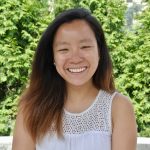 Sherry (she/her/hers) joined the Student Affairs team at Peabody in February 2021. In her role, she meets with students regular to provide support in meeting their personal and academic goals. She connects students with support services available at the University as well as community agencies. Sherry also coordinates and implements ongoing disability accommodations and services for all Peabody students. Prior to Peabody, Sherry worked at the George Washington University in Washington D.C. serving as an Area Coordinator in their Campus Living and Residential Education team.

Outside of work, Sherry enjoys testing out new recipes, running, and giving back to her community. 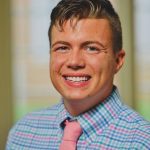 Chris has worked for the Johns Hopkins University system for over two and a half years. Having joined the Residential Life team at JHU Homewood, Chris worked with first and second-year residents on the Homewood campus where he supervised RAs, executed a residential curriculum, and was actively involved with LGBTQ+ Life and Multicultural Affairs. Chris joined the Peabody Student Affairs staff in December 2019 in a re-envisioned role as the Assistant Director of Student Engagement. In his current role at Peabody, Chris leads New Student Orientation, manages  clubs and organizations, advises the Peabody General Assembly (PGA), plans large scale events, and works to enhance the overall student experience here at the Conservatory. Alongside his full-time position, Chris also serves the larger field of Higher Education and Student Affairs as the current President of the Maryland College Personnel Association (MCPA), our state’s chapter of the American College Personnel Association (ACPA).

Chris is a Baltimore native who is a lover of brunch, Demi Lovato, and his dog, Piper. 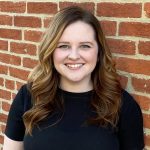 Sarah (she/her/hers) joined Peabody in November 2018 after working for two years at the Homewood campus of JHU in Homewood Student Affairs. Sarah manages communication in the Office of Student Affairs, including the weekly campus newsletter and social media profiles. She also hires and manages the office’s student workers as well as planning campus-wide social programming. Additionally, Sarah provides direct, high-level support to the Director of Student Affairs, the Case Manager, and the Departments of Student Engagement, Residence Life, and Summer Conferences. Each spring, she coordinates the annual Off-Campus Housing Fair.

In her spare time, Sarah enjoys spending time with friends, traveling, and hanging out with her dog, Molly. 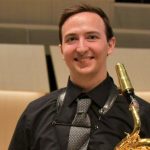 Christopher (He/Him/His) joins Student Affairs at Peabody as the Graduate Head Resident and supervises the Resident Assistant staff. He works closely with and is supervised by Dan Pretz, the Associate Director of Housing, Residence Life, and Summer Conferences. Christopher is a first-year doctoral student studying saxophone performance in the studio of Gary Louie and is excited to collaborate with other performers and to assist in the success of Residence Life students in the Peabody community.

Christopher earned his Bachelor of Music in Saxophone Performance from the University of Kansas in 2016, where he also served as a Resident Assistant for three years, and earned his Master of Music in Saxophone Performance from Wichita State University in 2019 while serving as a Graduate Teaching Assistant in the saxophone studio.

When he is not practicing his saxophones, Christopher practices other woodwinds including flute, clarinet, oboe, bassoon, and Irish tin whistle. He also enjoys arranging music that he can practice later, inventing extending techniques, and supporting his fellow artists. Aside from music, Christopher enjoys silly movies with friends, eating as many crab cakes as possible, and taking table tennis entirely too seriously. 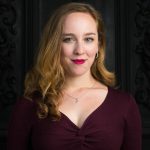 Cassidy Dixon (she/her) is so excited to be joining the Student Affairs team for a second year, this time as a Student Engagement Project Assistant. Cassidy works closely with Chris Ambrose, our Assistant Director of Student Engagement. Cassidy is a second-year Master of Music student here at Peabody in Voice and Pedagogy and is excited to work closer with students on projects and events. As an artist, Cassidy has worked on both sides both as a performer and as an administrator. She hopes to bring her unique perspective to the Office of Student Affairs.

Cassidy graduated from the University of Delaware in 2019 with an Honors Bachelor of Music and Minor in Music Management Studies.

In her free time, she likes to read mystery novels, drink tons of coffee and diet coke, and listen to podcasts. Cassidy and Chris both share a love for Demi Lovato and are often seen fangirling over the artist together. 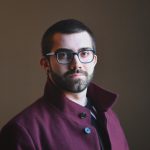 CJ Hartung (he/him) joins the Student Affairs team as a Student Engagement Project Assistant. CJ works closely with Chris Ambrose, our Assistant Director of Student Engagement. Prior to his current position, CJ reinstated and reformed the student body government, PGA, and served as President for 2 years during his undergraduate career at Peabody. He now returns as a second-year Master of Music student in Voice. CJ is an avid performer and champion of growth and development within the performing arts industry. He has an immense interest in race, identity and leadership within the arts, and defining what truly defines, and implements generational and cultural accessibility.