Over the past years, the Peabody String Sinfonia has developed and maintained relationships with community partners and individual audience members by reaching many diverse audiences in the Baltimore community. The Sinfonia has collaborated with and performed at the Helping Up Mission, Hope Lodge, the Azure Family Concert series, Rise Bmore, the Baltimore Early Head Start program, MD State Correctional Facility, and Marion House. As a Peabody-based ensemble, the Sinfonia organizes an annual concert and warmth drive in partnership with the Charm City Warmth Drive at Peabody’s Griswold Hall.

Our diverse programming includes everything from Tchaikovsky and Arvo Part to Aretha Franklin and the Beatles. We have also invited various Peabody faculty members including Judith Ingolfsson (violin), John Moran (baroque cello), Shodekeh (beatboxer, dance faculty), Alan Stepansky (cello), and Victoria Chiang (viola) to play with the ensemble. Merging these musical forces with Sinfonia’s creative programming and unconventional performance format has allowed for more intimate settings where both performer and audience can connect on an equal and meaningful level before, during and after the concert.

As the current Co-Directors of Sinfonia, Anita-Mae and Nathan are responsible for the administration elements of Sinfonia including organizing rehearsal and concert schedules and communicating with community partners. They provide student leadership in the form of organizing librarian tasks, marketing, and working together with the Faculty Mentor to determine the artistic vision of Sinfonia.

My name is Anita-Mae Kahan, and I'm a 20-year-old cellist from Brooklyn, New York. I started playing cello when I was 10 with my dad, who's a bass player. I love playing classical, jazz, and contemporary music on my cello, and I hope to expand my musical horizons in the future by playing as many different styles of music as possible with as many people as possible.

My name is Nathan Hillman, and I'm a violist, composer, and arranger from Monroe, Maine. I began playing violin over 20 years ago, but switched to viola in middle school. My love for harmonies is what originally drew me to viola (and composition), and I still love being an inner voice in chamber music to this day! In addition to music, my interests include hiking, sustainable living, farming, and chickens, and I would like to live off the grid sometime in the future.

As Faculty Mentor, Judith Ingolfsson provides artistic mentorship and advice to the ensemble as well as providing guidance for the long term vision of the group. She assists with the choice of programming, auditioning student members, and inviting guests. Ingolfsson regularly coaches the ensemble both as soloist and from inside the group. 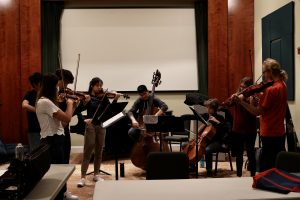 Sarah Cummings is a sophomore at Peabody studying viola performance and recording arts. In her home state of Indiana, she was principal violist of several youth orchestras and played professionally with the symphony orchestras of Anderson and Columbus. She also rang handbells and sang in the choir at St. Paul’s Episcopal Church. When she’s not playing viola, Sarah enjoys reading, gardening, and spending quality time with cats.

Jesse Zhu is a violinist at the Peabody Conservatory in his first year. Before he entered, he graduated from Middle School Affiliated to China Conservatory of Music. In previous years, Jesse has been invited by Lucerne Festival to participate in commemorate the 250th anniversary of Beethoven’s birth. His performance was posted on their website for people to watch, in 2019, He got a chance to work with Seoul Philharmonic Orchestra, who as a China side member and jointly organize Olympic and Paralympic Winter Games PyeongChang 2018 1st Anniversary Festival. In May 2021. He had a personal concert at China Conservatory of Music. Jesse is currently a student at the Peabody Conservatory in the studio of Qing Li. His expertise in expend on Chamber Music, Small Ensemble, analysis and various well-known orchestra’s recordings.

Hi! My name is Joseph Bates, and I’m a violinist and violist from Tulsa, Oklahoma. I started playing violin at 11 and told my parents at the time that I only wanted to play old time fiddle music, never classical music. Well, now I’ve got a degree in classical violin, so you can see how that worked out. Playing in small groups is what convinced me that music was what I wanted to do for my career. The experience of working hard towards a common goal with my friends is what keeps me playing even today. I love playing new music and I hope to use my career to promote the work of living composers from under represented groups.

My name is Hayley Camp and I am from Seattle, Washington. I started playing the violin in 5th grade at my elementary school orchestra. The thing I love most about music is playing chamber music, especially with my friends, since I want to make a meaningful connection with my peers and the audience. Looking forward, I really hope to continue music as a career either in a chamber group or in an orchestra.

Hi, my name is Justin Cao and I’m from West Windsor, New Jersey and I’ve been playing for 11 years. I started playing in my elementary school orchestra and I’ve been in love with orchestra ever since, there’s nothing quite like 100 people making the most intricate and elaborate sounds, that kind of teamwork and unified intention is a miracle anywhere else. In the future, I hope people can see the same thing I see, and maybe I won’t be the only person in class thinking that orchestra is super cool.

Hanyu Feng started to play the violin at the age of 4, and she had won the second prize in the preschool division of the First Annual National Youth Competition at the age of 5. She continued to win several national competitions with her growth. In 2019, Hanyu won the coveted position of concertmaster of NYO-China, and continuing to work under the mentorship of maestro Morlot, she performed with pianist Garrick Ohlsson on a tour to Suffolk, UK, Bolzano, Italy, and Shanghai, China. Now Hanyu is continuing her music studies under Professor Qing Li, the Principal Second Violin of the Baltimore Symphony Orchestra in Peabody Institute of Music.