Associate Dean for Finance and Administration 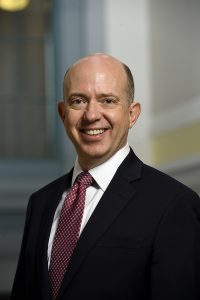 Joe Rooney joined the Peabody Institute as Associate Dean for Finance and Administration in May, 2019.

An accomplished nonprofit executive with more than 20 years of experience as both chief financial officer and chief operating officer, Rooney most recently served as deputy director of the Metropolitan Policy Program at the Brookings Institution in Washington, D.C. While there, he managed the program’s strategic planning and operational excellence efforts, improved finance and business processes, streamlined human resources management, and served on or led several Brookings institution-wide initiatives.

Previously, Rooney was the chief operating officer of the Association of Performing Arts Professionals, an international member organization, and served as both the chief financial officer and vice president of operations for the New 42nd Street, the organization responsible for the adaptive reuse of eight historic theaters on 42nd Street in New York City. Rooney also served the managing director of Denham Wolf Real Estate Services, providing consulting and brokerage services for nonprofit organizations throughout New York’s boroughs. He began his career with an eight-year tenure at Baltimore Centerstage, including several years as the director of operations.

Rooney received his MBA from Columbia University, where he was awarded the Joanne Martin Award for Public and Nonprofit Management, and his BA from Linfield College in Oregon. He has also previously been an active certified executive coach (CPCC) and a certified Senior Professional in Human Resources (SPHR).