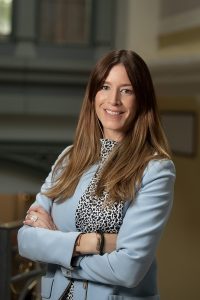 Prior to coming to Peabody, Rowe held several positions at the University of Colorado Boulder (CU Boulder) since 2015. Most recently, she served as Assistant Dean for Advancement for the CU Boulder College of Music and Colorado Shakespeare Festival. During her tenure with the College of Music, she led the team’s music+ fundraising effort, a $50M campaign in support of the college’s people, programs and endowment.

Previous to her work at CU Boulder, Rowe held programmatic and fundraising positions in Chicago. In 2014, she was part of the Museum of Contemporary Art Chicago’s development team that raised record-breaking support for David Bowie Is, the museum’s blockbuster exhibition that celebrated five decades of music, art and fashion from the music icon’s personal archives.

Rowe completed her BA in International Affairs at the University of Colorado Boulder, and holds a Master in Public Policy from DePaul University. In addition to passionately supporting the performing and visual arts, she is an avid traveler and loves spending time outdoors.