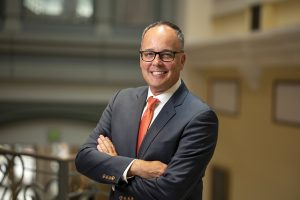 Bob Halbruner joined the Peabody Institute in September 2022 as Associate Dean for External Relations, providing overall strategic leadership to advance Peabody’s Development, Alumni Relations, and Marketing and Communications programs. He most recently served as Director of Individual Advancement at the Smithsonian Institution, leading its membership, major gifts, and planned giving programs that generate $50 million in new commitments annually. Previously, he served as Assistant Vice President for Development at the University of Virginia where he led nine fundraising teams that secured $45 million in new commitments annually and had a university-wide impact of more than $170 million through support of reunion year giving across schools and units.

Earlier in his career, Halbruner led fundraising and marketing efforts for the Richmond Symphony in Virginia and the Arts & Science Council (ASC) in Charlotte, one of the country’s largest united arts funds and local arts agencies. He was responsible for donor communications as well as cultivation and stewardship events for ASC’s nationally recognized workplace giving program and the region’s Campaign for Cultural Facilities. Upon completion, the Campaign for Cultural Facilities received the Excellence in Fundraising Award at the International AFP Conference and Charlotte’s downtown Mint Museum of Art, Bechtler Museum of Modern Art, Knight Theatre and the Harvey B. Gantt Center for African-American Arts + Culture were all realized.

Halbruner has been a participant in local and national leadership initiatives including the League of American Orchestras Executive Leadership Program, Leadership Charlotte, The Foundation For The Carolinas Leadership Development Initiative, and the Knight Foundation’s Magic of Music Initiative that studied the health of American orchestras. He has presented on a variety of arts and cultural participation topics at national conventions including the National Music Teachers Association, the League of American Orchestras, and the American Association of State and Local History.

A graduate of the University of the Arts and the Peabody Institute of The Johns Hopkins University, he holds bachelor’s and master’s degrees in piano performance.