“Stanley Cornett was the epitome of Prince Tamino. He moved with great personal charm, his fine voice was sweet and lyric and he used it effortlessly.”–Maritza Morgan, The Chautauquan Daily(7/22/75); Mozart: The Magic Flute, Chautauqua Opera.

“Stanley Cornett as Count Camille de Rosillon has a superb silvery tenor voice and he also knows how to handle it. His singing was perhaps the most outstanding vocal achievement of the evening.”–Herman Berlinski, The Jewish Week (7/24-30/80);  The Merry Widow, Summer Opera Theatre, Washington, D.C.

“Mr. Cornett is a slender young man and one was surprised at the lusty tenor voice he produced, making of the ‘Rose’ solo and duet in the second act a highlight of the evening.”–Eugene Walter, Mobile Press Register (10/14/83); The Merry Widow (Camille), Mobile Opera.

“As Count Almaviva, the young Spanish nobleman, tenor Stanley Cornett has a voice that is strong and clear. His humorous disguises–as a rowdy soldier and a prissy music teacher–provide a showcase for his acting versatility.”–Edward Gunts, Baltimore News American (7/13/79); Rossini: The Barber of Seville, Harford Opera. 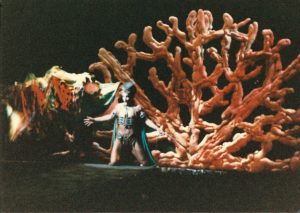 “Stanley Cornett was a fresh and lyrical Quint, comfortable in the coloratura flights and able to exhibit a comparable feel for the text.”–Stephen Cera, The Baltimore Sun (2/15/82); Britten: The Turn of the Screw, Baltimore Chamber Opera.

“The male lead was sung by Stanley Cornett. It was announced that he would sing though indisposed, but any indisposition was not evident either in vocal quality or in acting skill. He kept his superb tenor light in scale, which was appropriate in match to Miss Flasch’s quality; and with several high Cs and one D, no one quarreled with his projection of the role.”–Frank Macomber, Syracuse Post-Standard(12/21/74); Rossini: La Cenerentola (Ramiro), Syracuse Opera.

“Cornett, especially, was not afraid to take liberties with his already precise and difficult part. His voice was clean and pleasurable.”–Syracuse New Times (1/12/75): La Cenerentola (Ramiro), Syracuse Opera.

“Probably the evening’s most effective comedy was offered by Stanley Cornett as Gabriel von Eisenstein, the Viennese playboy-prankster and central character. Besides a graphically mobile face and a flair for stage timing, he brought to the role a pleasing tenor quality and musical control.”–George H. Kimball, The Rochester Times-Union (11/15/74); J. Strauss: Die Fledermaus, Eastman Opera Theatre.

“Perhaps the most exciting was the certainty that in tenor Stanley Cornett as Charlie Dalrymple and baritone Jason Stearns as Tommy Albright we heard two outstanding talents who can only spin forward from here like twin comets. Cornett set his own vocal fires with brilliance in ‘I’ll Go Home With Bonnie Jean’ and with a uniquely evocative kind of tenderness in ‘Come to Me, Bend To Me.'” –Theodore Price, Rochester Democrat and Chronicle (7/15/72); Loewe: Brigadoon, “Opera Under the Stars,” Rochester, NY.

“To throw the bouquets first: Stanley Cornett and Celina Lindsley were appropriate as the pair of lovers. Cornett has a fine tenor voice, a rarity in these parts, and when he let it ring out it was thrilling to hear.”– Michael Walsh, Rochester Democrat and Chronicle (6/30/73) (presently Music Critic for Time magazine); Vaughan Williams:The Poisoned Kiss, “Opera Under the Stars.”

“Most of the cuts were in the recitatives, but Paolino’s ‘Brillar mi sento i1 cor’ was also cut, as it usually is, on the assumption that he gets another extended aria later on. However, Stanley Cornett, in the role of Paolino, displayed such an engaging stage manner and so sweet a tenor voice that I missed it nonetheless.” –Anthony Coggi, WFUV-FM Radio, NYC (2/26/76); Cimarosa: II Matrimonio Segreto, Juilliard Opera Theatre. 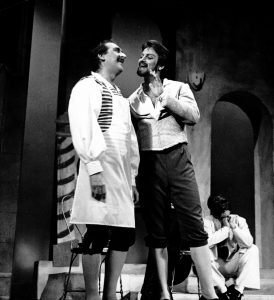 “Two singers who did not need this kind of improvement were. . . Stanley Cornett, an excellent tenor who handled the problematic role of Monostatos about as well as it can be done.”–Joseph McLellan, The Washington Post (1/17/84); The Magic Flute, Baltimore Opera.

“Chief among these is Stanley Cornett’s portrayal of Albert Herring. Cornett’s shy and retiring Herring was from the beginning an awkwardly endearing personality. Herring is a character that should win immediate sympathy, and Cornett was right on the mark. At Albert’s first appearance the audience is hopelessly in love. Cornett never loses us. Many examples can be cited as corroboration of Cornett’s success. Consider the May Day Celebration scene in which Herring is called upon to make an impromptu speech. Cornett must nervously palpitate for at least a full 60 seconds, inventing at least a dozen expressions of discomfort. Cornett is also fluent in his diction, a virtue unfortunately lacking in most of the rest of the cast.”–Tom Poore, The Prince George’s Journal (Maryland) (3/9/79); Britten: Albert Herring, University of Maryland (coaching by Sir Peter Pears).

“Outstanding in the large cast was. . . Stanley Cornett as the mounteback Jack Prence. He is very agile and he was the only person in the cast whose every word could be understood.”–Sarita H. Weeks The Jamestown Post (New York) (8/20/74); Howard Hanson: Merry Mount, Chautauqua Opera.

Read more about Stanley Cornett in his bio.