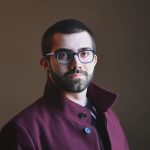 Christopher J. Hartung is a second year Master of Music candidate in the studio of Dr. Steven Rainbolt. Having received his B.M in Vocal Performance from Peabody as well, Mr.Hartung has been seen in main stage productions since his freshman year. Notable roles include Mr. Darcy in the staged premiere of Pride and Prejudice, Dr. Bartolo and Figaro in Le Nozze di Figaro, Belcore in L’Elisir d’Amore, and as a Blues Soloist and Street Singer in MASS. Outside of Peabody, Mr. Hartung has performed numerous roles and choruses with the Baltimore Symphony Orchestra, Philadelphia Orchestra, Baltimore Concert Opera, Maryland Opera, Young Victorian Theatre Company and Berk’s Opera Company. Mr. Hartung currently maintains a voice and piano studio with Naptown Sings and Plays of Annapolis, Maryland. Upcoming engagements include two role premiers of Papageno in Die Zauberflöte and Peter in Hänsel und Gretel in May and June of 2021, with the LAH-SOW. He will also perform the role of Papageno with the Berk’s Opera Company, in August of 2021.  Upon graduation, he plans to continue pursuing a performance career while also investing in his interests as a leader at the intersectionality of cultural and generational accessibilities within the arts and society.

Learn more about Steven Rainbolt from his bio.